As soon as we arrived, we were forced to communicate with other people, who we did not know and all in English. The main goal of this session is to get young people from their comfort zone and make them cooperate with others, mostly strangers. And from my point of view, it worked out pretty well. We were almost immediately split up into the committees and the teambuilding begun. After a few hours it felt like we have known each other for eternity. I got to know some amazing people and we built a strong foundation of our future work. The whole teambuilding was far beyond awesome.

After our teambuilding activities, we moved to a nearby city called Kunovice for the opening ceremony. After everyone gathered, the president of the EYP Czech Republic, Viktor Karlíček (who used to go to our school) delivered a speech, followed by more important guests. After all the talking was finished, we moved on to an event called the Eurovillage. Before the session began, every delegation was assigned a country and had to cook several meals traditional for its cuisine. We got Italy, and prepared meals like pizza (both vegan and non-vegan), rizzotto, spaghetti... After that, we went back to the accommodation and got ready for the upcoming day.

We went to a local primary school, where a little breakfast was waiting for all of us, right after waking up in Saturday’s morning. Consequently, we were separated by our committees into different classes and there all the work started. Good mood is all-important, so we played some entertaining games, first of all. After that we got our topics and started with the real work. First we had to put together specific problems connected to our topic and then think about their solutions. When we had any problem, our chairpersons always willingly helped us. There were also two coffee breaks, before and after the lunch, so we had some time to relax and talk to students from different committees. After many and many discussions we finally had our work done, but the hardest thing was still about to come.

On Saturday evening after a day full of Committee Work followed by a nice dinner, came the Panel Debate, during which three experts from all around the Czech Republic gathered to talk about the topic of alternative education. The aforementioned guests were Bohumil Kratous, Alena Fidlerová, and George Podzimek. At first, the Debate started by the three speakers introducing themselves, their current occupation and answering the question on what is their opinion of our country’s education system. Mutually it was agreed that the best option everyone has is to study abroad, as our traditions tend to lower the quality of schooling in comparison to other countries, such as the United States. Towards the end, the Delegates were given an opportunity to ask questions directed at the experts. After the Debate ended, everyone was eager to head off to the Party...

On Saturday evening, we had Farewell party. It started at 8 o'clock pm and ended at 11:40 pm. It took place at a dance bar in Uherské Hradiště. We were supposed to wear pyjamas. When it started, nobody wanted to dance so organizers started dancing and we joined. Some popular music such as Rasputin was played there. To tell you the truth, I really enjoyed it.

Sunday morning, everyone was tired and restless as they had been preparing their speeches all night. However, the awaiting General Assembly was the main stress inducing factor, affecting everyone’s overall composure. Because, you see, General Assembly is the last and main stage. All the work you did with the tiny amount of sleep you had is being discussed and if your resolutions are agreed with by the mass, your committee passes. Of course, whether or not you pass pales in significance when compared to the newly-gained experiences in teambuilding and problem solving, but still seeing your work being evaluated by opposing committees and passing makes it that much more valuable.

Each delegate had an assigned position varying in length and preparation time, but all equally as challenging. Thankfully, our eight hours of labour with only minor coffee breaks were rewarded with pizza for lunch!

After consuming an unhealthy amount of pizza and the only two committees remaining, we realised there wasn’t much time until we had to part ways with our new but already close friends.

The Closing Ceremony was the last part of the session and it was also the saddest part. It started with speeches from the organisers, such as the President, the media team and many other people who took a big part at organising such an amazing session.

Their speeches were really amazing and touched our hearts, because we did not want to leave. Then we watched a few videos from the session that the media team has prepared for us and it was very cute and we cried because we knew that from now long, these past three days will become just a memory.

Although we were crying we didn’t feel embarrassed, because we weren’t the only ones. After the speeches and videos, we played the Czech National Anthem and the European Anthem. After that, all the participants and organisers formed a circle and we sang Imagine by John Lennon which is an EYP traditions that is ending every session.

After this we said goodbye to our friends that we knew for a short time, but we created a strong bond with them and whole EYP. It was a very sad moment, but we finally took our stuff and went on a train station. We were a bit nervous, because our train to Olomouc had a big delay and we had just 13 minutes for a change between two trains in Olomouc. We were lucky, because the train waited for us and we did not need to wait 5 hours for the next one.

EYP was a great experience for me and my classmates. I am glad that I had the opportunity to go, because I improved my English, had a great experience and learned a lot. I also made new friends all around the Czech Republic and even a few behind the borders of Czechia. 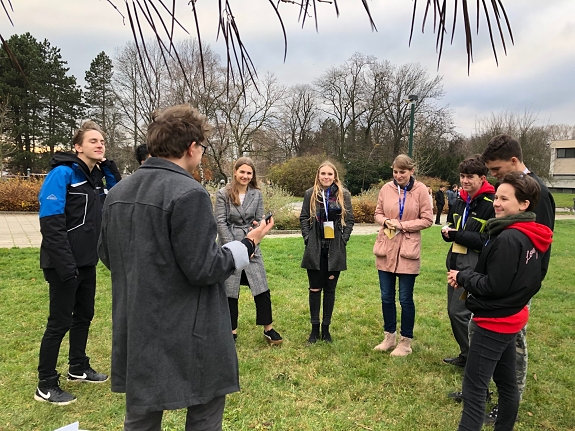 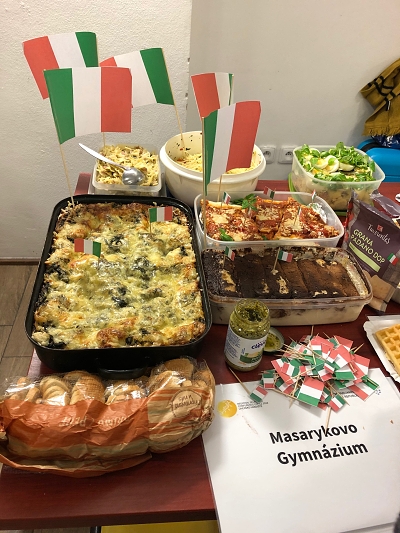 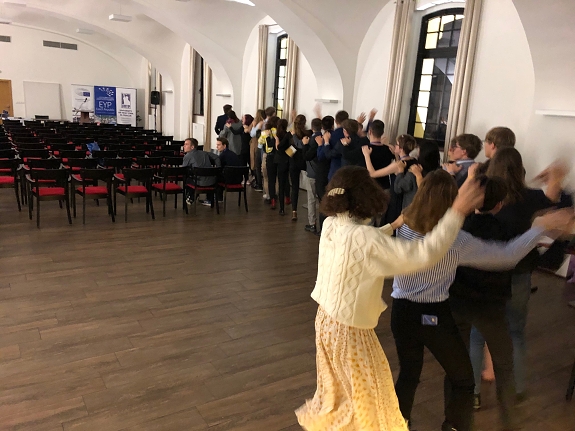 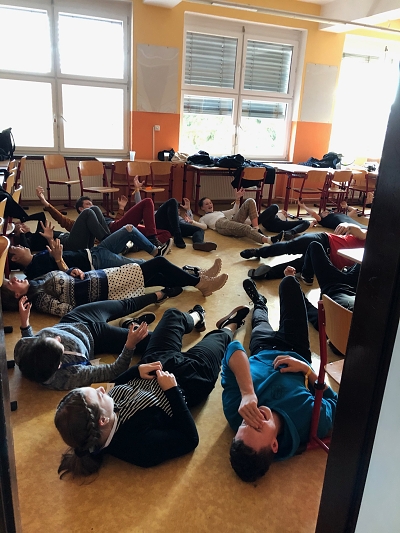 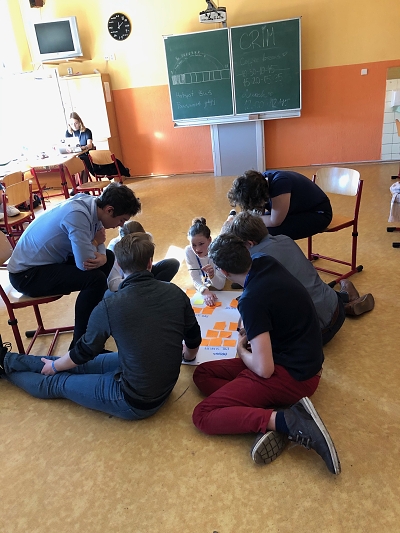 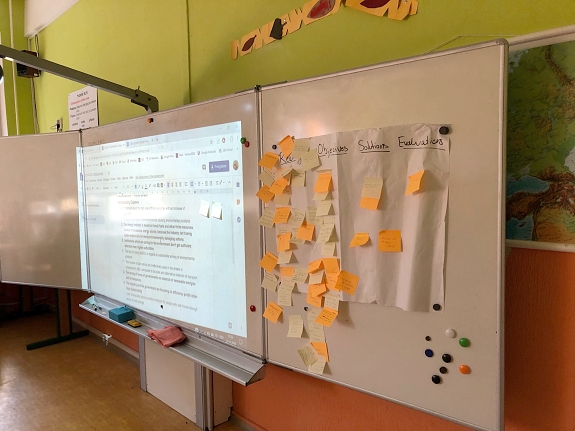 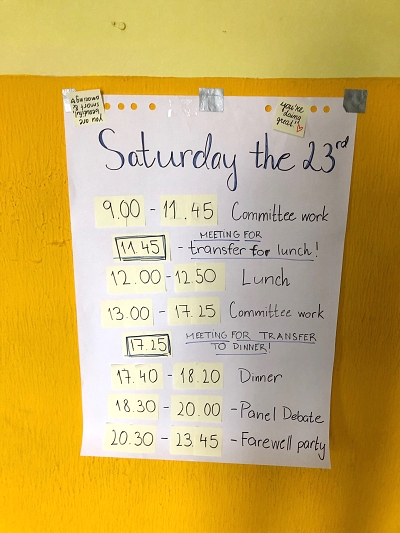 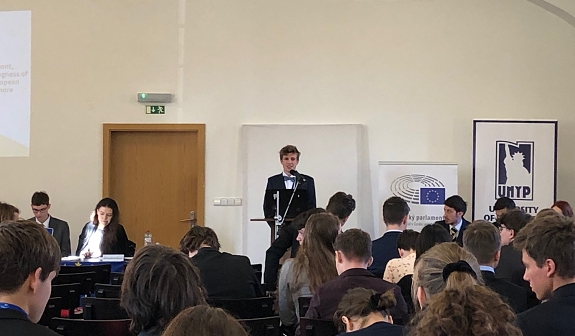