In the date of 14th to 16th December 2016, some of Masarykovo gymnázium students took part in an excursion to Strasbourg and a visit to the European Parliament accompanied by a Social sciences teacher, Mgr. Petr Tesař. This event was organised by an organisation called Mladí Demokraté and it was a reward for the students’ successes in an event Municipal Council Simulation, which took place earlier that year.

We met at náměstí Milady Horákové on Wednesday at 1 o’clock in the morning (or in the night, more precisely). Here we waited with other Pilsner participants for a bus, which arrived from Prague and Brno. After an 8-hour trip through Germany, we successfully got to the French city of Strasbourg where we were divided into two groups. The first one visited the European Parliament that day and attended the Sakharov Prize for Freedom of Thought ceremony. The second group, in which we were, had a sight-seeing walk through the city and a visit to the famous Strasbourg Christmas market. We then got a few hours of free time so most of us went buying Christmas presents and circulating through the local cafés. That evening, we went to a restaurant for a joint dinner for all the participants and organisers. We were provided with multiple options on what to eat, however, the conditions for some of us who are vegetarian or have a gluten-free diet weren’t really appealing. After the dinner, we departed for the hotels, to which we were taken by our bus again.

We all had a nice sleep, were fresh in the morning, and were looking forward to the upcoming programme. Upon arriving to Strasbourg, we were again divided into the two groups. This time, we went to the desired seat of the European Parliament. Here we passed through a security check and went to see the session. Unfortunately, we arrived at the beginning of the meeting so there weren’t many MEPs present. Inside we all found headphones translating the speeches into all 24 official languages of the EU in real time. We also heard two speeches in Czech regarding the point of agenda The situation of the Rohingya minority in Myanmar. After this nspiring moment, we went to another room where we had a meeting with one of the Czech Members of the European Parliament, Ing. Jaromír Štětina. He introduced us to his job as a MEP and also talked about the Russian-Ukrainian crisis. After the upcoming discussion and further questions, he had to leave for voting on that day’s agenda and another employee of the EP approached us with a presentation on the European politics and its system.

Afterwards followed a late lunch in the cafeteria of the European Parliament. We then again had a few hours to sightsee all the cafés in Strasbourg and went to a joint dinner to a very classy tavern at the end of the day. A full course dinner awaited us and everyone was satisfied and delighted, to say the least. This occasion brought a lot of interesting topics to talk about, mostly regarding religion questions as there were many believers of multiple religions amongst the participants. For instance, whether worshipping Václav Klaus is enough to be considered a religion or if it would have to manage with the status of theism. Those above eighteen years of age were also allowed to degust the world-renowned French wine. After this event, we were again driven to our hotels where we spent our last night of the journey.

The next day, we had a small one-hour stop in the French city of Colmar to have a look at local landmarks and went back to Czechia. This trip was really educational and we would recommend it to other students as well! 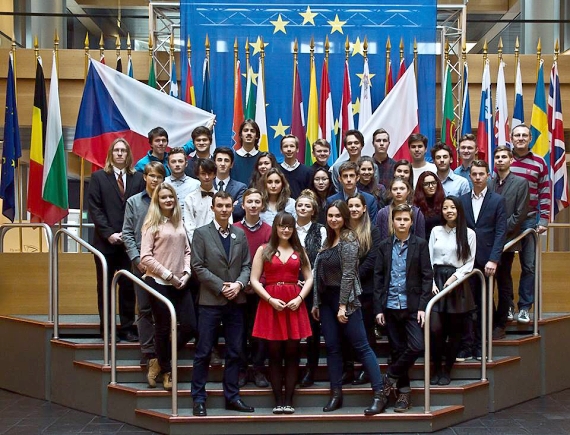