At 9 a.m., we found ourselves in the parliamentary hall of the Pilsen City Hall (where the actual Municipal Council has its sessions as well). There, the team of organisers introduced itself as well as the guest of the event, Mgr. Jan Fluxa, vice-mayor of the city district Slovany. He was talking about his job as a Municipal Council member and what he has to undergo during the negotiations. He also explained the importance of municipal politics and mentioned some differences to the national/European politics.

After the lecture and the following discussion, when there were questions on various topics, another speaker was the Mladí demokraté president, Mgr. Jiří Klindera, who briefly presented the layering of the Czech political system and the Rules of Procedure for the upcoming simulation as well. We were introduced to three points of agenda – slot-machines regulation in the city of Pilsen, the question of parking and the newly adopted system of “blue park zones”, and last but not least a sale of a fictive building to a private proprietor. We were provided with a draft resolution for two of the issues, which we were supposed to either build upon, to suggest amendments to or to pass.

After a short coffee break, we were randomly assigned to represent Czech political parties and movements and the number of representatives of each party was in due proportion to those in the Pilsner Municipal Council. With that, we had about half an hour to discuss our position regarding the given topics within our respective political parties so that the stances reflect the steps the actual parties would take at least partially.

Having digested the consequent lunch, which was very surprising in a nice way, the actual simulation of the Municipal Council was free to begin. Its course was truly interesting and funny at times, too. Be it thanks to the relentless representatives of ODS (Civic Democratic Party) and their urge for capitalist merits, be it the authentic delegates of KSČM (Communist Party) and their lectures on democratic principles, be it the disability of ANO 2011 movement members to properly control the sound system or be it the classic and fitting remarks of TOP 09 party towards the mentioned movement. Even in spite of these rather humorous highlights the negotiations were in general fruitful and were rewarded with passing most of the resolutions.

Before we were sent home, out of some 30 participants the team of organisers chose the best five who they evaluated as delegates with the best argumentation and presentation skills. From our school, three students managed to be in this quintuple – Barbora Soukupová, Viktor Karlíček, and Jan Rosenthaler. Mladí demokraté also offered the opportunity to take part in an excursion to Strasbourg and the European Parliament, provided at least two students from the school are placed amongst the best five.

Great thanks indeed goes to other Masarykovo gymnázium participants who contributed to the debate and were active during the session. And all that after either having some experience from other diplomatic simulations or being completely new to this field. Namely, they were Veronika Bělinová, Zuzana Káčereková, Tereza Kinkorová, Vu Thao Chi, and Jaroslav Zimmermann! 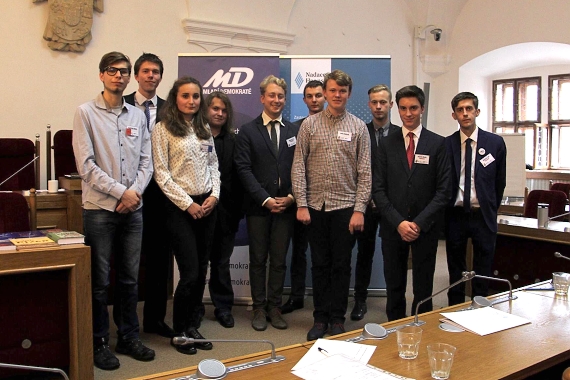